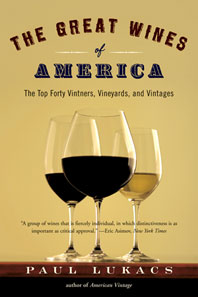 The stories behind America's finest wines, and the people and places that have made them so admired today.

American wine—once an object of ridicule—now holds its own against the world's best. But which wines are America's finest? Who makes them? In The Great Wines of America, Paul Lukacs selects forty wines that have helped elevate American wine to unprecedented heights. Each chapter contains the specific wine's history, the vintner's vision for it, a map of its terroir, and a list of successful vintages.

Not too long ago, American wine was an object of ridicule. When compared to the great growths of Europe, it played in the minor leagues—if it even played the same game. All that has changed. At the start of the twenty-first century, the finest American wines hold their own with the best made anywhere. But which wines are these? And who are the people responsible for them? Because American vineyards are largely devoid of tradition, American vintners have had to make choices unknown to their Old World counterparts. These involve which grapes to grow, where best to plant the vines, and, most important, how to create rather than merely emulate truly distinctive wines. The Great Wines of America tells the story of how those choices, made successfully, have elevated American wine to unprecedented heights of quality and renown.

“Lukacs, who is rapidly becoming our leading expert on domestic wine, explains with engaging prose how these wines, and the people behind them, have been essential to the coming of age of American wine.” — Michael Apstein, Boston Globe

“Mr. Lukacs’s list could easily have resulted in a familiar, ho-hum rendition of greatest hits, but he refuses to settle for that. Instead, he offers a group of wines that is fiercely individual, in which distinctiveness is as important as critical approval.” — Eric Asimov, New York Times