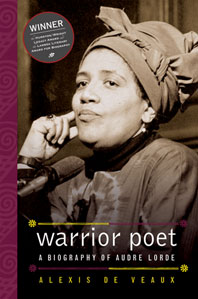 Winner of the 2005 Lambda Literary Award, the Hurston/Wright Legacy Award, and the Gustavus Myers Outstanding Book Award: the first and "essential" (Choice) biography of the author, poet, and American icon of womanhood, black arts, and survival.

During her lifetime, Audre Lorde (1934-1992), author of the landmark Cancer Journals, created a mythic identity for herself that retains its vitality to this day. Drawing from the private archives of the poet's estate and numerous interviews, Alexis De Veaux demystifies Lorde's iconic status, charting her conservative childhood in Harlem; her early marriage to a white, gay man with whom she had two children; her emergence as an outspoken black feminist lesbian; and her canonization as a seminal poet of American literature.

“A clearly written and extensively researched volume that is every bit as formidable as Lorde herself was, and will likely be regarded as the definitive study of the controversial poet.” — Buffalo News

“De Veaux’s thorough tale of a complicated artist is compelling. Lorde comes to life, and her powerful prose is presented in a whole new light.” — Essence