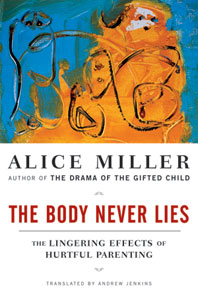 An examination of childhood trauma and its surreptitious, debilitating effects by one of the world's leading psychoanalysts.

Never before has world-renowned psychoanalyst Alice Miller examined so persuasively the long-range consequences of childhood abuse on the body. Using the experiences of her patients along with the biographical stories of literary giants such as Virginia Woolf, Franz Kafka, and Marcel Proust, Miller shows how a child's humiliation, impotence, and bottled rage will manifest itself as adult illness—be it cancer, stroke, or other debilitating diseases. Never one to shy away from controversy, Miller urges society as a whole to jettison its belief in the Fourth Commandment and not to extend forgiveness to parents whose tyrannical childrearing methods have resulted in unhappy, and often ruined, adult lives. In this empowering work, writes Rutgers professor Philip Greven, "readers will learn how to confront the overt and covert traumas of their own childhoods with the enlightened guidance of Alice Miller."