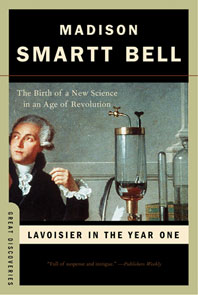 Antoine Lavoisier reinvented chemistry, overthrowing the long-established principles of alchemy and inventing an entirely new terminology, one still in use by chemists. Madison Smartt Bell’s enthralling narrative reads like a race to the finish line, as the very circumstances that enabled Lavoisier to secure his reputation as the father of modern chemistry—a considerable fortune and social connections with the likes of Benjamin Franklin—also caused his glory to be cut short by the French Revolution.

“Bell succeeds, not only in depicting the rigorousness of Lavoisier’s method, but also in conveying a sense of his character, as revealed most affectingly by the quietly heroic composure with which he faced his own death.” — Merle Rubin, Los Angeles Times Book Review