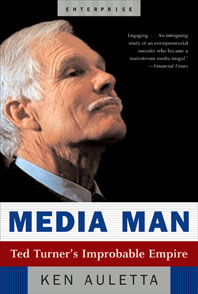 "Auletta puts the most human of faces on Turner yet . . . [as] a tycoon who has lost his power." —BusinessWeek

Ted Turner revolutionized television. Foreseeing cable's potential in its infancy, he parlayed a tiny UHF station in Atlanta into a national superstation, invented CNN, and transformed sports teams and the MGM film library into lucrative programming. Ken Auletta, the most respected media journalist in America, enjoyed unparalleled access to the outspoken and defiant Turner in writing this book (named one of BusinessWeek's Top Ten Books of 2004), capturing the visionary businessman as he built—and lost—his improbable empire.

“A nuanced and engaging portrait of an immensely complicated man. . . . The book hits its highest notes in depicting how a mercurial cable mogul revolutionized the news industry—and then watched as the manic boom-and-bust cycle of the 1990s swallowed up and regurgitated his prize innovation. . . . Readers may find more detailed analyses of the merger of AOL and Time Warner, but they will find none more entertaining, straightforward, or comprehensible.” — Washington Post Book World