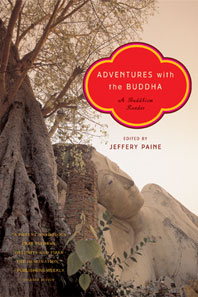 The flavor, the savor, and the sense of Buddhism as revealed through personal stories of Westerners who lived it.

Many books on Buddhism will edify you, but will they entertain you? Here, finally, is a book that yields an understanding of Buddhism; not by its metaphysics or rituals but through real characters and true stories as dramatic as those in the most imaginative novel. Jeffery Paine has assembled the breathtaking adventures of nine Westerners who traveled in China, Tibet, and Japan, in Nepal and India, and in that new Buddhist frontier, America, chanced across Buddhism, and made it an integral part of their lives. Through vivid travel writing and gripping human tales, the reader is exposed not just to the theory of Buddhist philosophy and practice but also to what it looks like from the inside. From enchanting, now-lost kingdoms in Asia to the American workplace where a practitioner is profitably applying the dharma, Adventures with the Buddha is a tour de force across nations, generations, and, ultimately, spirituality.