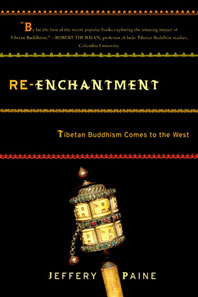 The colorful tale of the successful flowering of an obscure, ancient Eastern sect in the modern world.

In a single generation, Tibetan Buddhism developed from the faith of a remote mountain people, associated with bizarre, almost medieval, superstitions, to perhaps the most rapidly growing and celebrity-studded religion in the West. Disaffected with other religious traditions yet searching for meaning, huge numbers of Americans have found their way to the wisdom of Tibetan lamas in exile. Earthy, humorous, commonsensical, and eccentric, these flamboyant teachers—larger-than-life characters like Lama Yeshe and Chogyma Trungpa—proved to be charismatic and gifted ambassadors for their ancient religion. So did two Western women, born in Brooklyn and London's East End, whose homegrown religious intuitions turned out to be identical with the most sophisticated Tibetan teachings, revealing them to be reincarnated lamas. With great flair for both the sublime and the human, Jeffrey Paine narrates in page-turning, richly informative fashion how Tibetan Buddhism—rarefied and sensual, mystical and commonsensical—became the ideal religion for a "post-religious" age. "By far the best of the recent popular books exploring the amazing impact of Tibetan Buddhism. Paine's witty, erudite, flowing prose creates a memorable album of many characters—saints, rascals, and ordinary folks. He glosses over nothing, is ruthlessly critical where it is deserved, but is also secure enough to appreciate the beauty and the power of the 'magic and mystery': the profound practical wisdom and compassion of Tibetan civilization gone global."—Robert Thurman, Jey Tsong Khapa Professor of Indo-Tibetan Buddhist Studies, Columbia University "Riveting....Recounts elegantly, yet without fuss, stories of human transformation that consistently incite our capacity for wonder."—Askold Melnyczuk, Boston Globe "Memorable anecdotes, great storytelling and keen observations mark this cogent exploration of the explosive growth of Tibetan Buddhism in the West."—Publishers Weekly, starred review