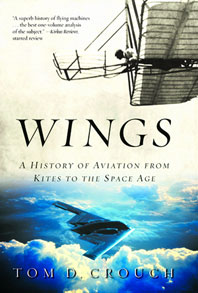 "A superb history of flying machines . . . the best one-volume analysis of the subject."—Kirkus Reviews, starred review

The invention of the airplane ushered in the modern age—a new era of global commerce, revolutionary technologies, and total war. Whatever the practical consequences, the sheer exhilaration of flight captured the imagination. No longer bound to the surface of the earth, humans took the first steps on a journey that would eventually carry them to other worlds. Tom Crouch weaves the people, machines, and ideas of the air age into a compelling narrative. He tells how the enthusiasm of amateurs spawned an industry that determined the rise and fall of nations. Yet this is not a tale of unalloyed progress. Moments of exaltation were tempered by bitter disappointment and stark terror. Blind alleys were the price of technical progress. In the end, there is no more fascinating cast of characters than those who wrote history in the sky. Theirs is a fascinating story of realizing an extraordinary dream and riding it.