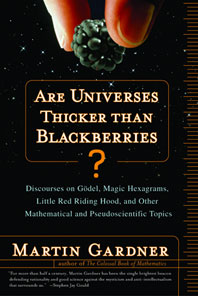 Martin Gardner—"one of the most brilliant men and gracious writers I have ever known," wrote Stephen Jay Gould—is the wittiest, most devastating debunker of scientific fraud and chicanery of our time. In this new book Gardner explores startling scientific concepts, such as the possibility of multiple universes and the theory that time can go backwards. Armed with his expert, skeptical eye, he examines the bizarre tangents produced by Freudians and deconstructionists in their critiques of "Little Red Riding Hood," and reveals the fallacies of pseudoscientific cures, from Dr. Bruno Bettelheim's erroneous theory of autism to the cruel farces of Facilitated Communication and Primal Scream Therapy. Ever prolific, and still engaging at the spry age of eighty-eight, Gardner has become an American institution unto himself, a writer to be celebrated.