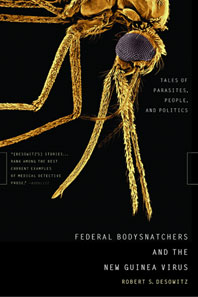 Twenty years ago the world slept, confident that biomedical science would protect it from devastating plagues. Our wake-up call sounded at the outbreak of the AIDS epidemic. Then came more unfamiliar pathogens in its wake, such as the West Nile virus. Meanwhile, the neglected diseases of the third world, including malaria and African sleeping sickness, festered—their victims salvageable only by unaffordable, patent-protected drugs. Robert S. Desowitz traces the histories of these diseases and the issues we must confront—the morality and legality of patent laws, the effect of global warming on epidemics, public support for the commercial biochemical industry, the growing dissociation of clinicians and public health professionals, and the terrifying shadow of bioterrorism.