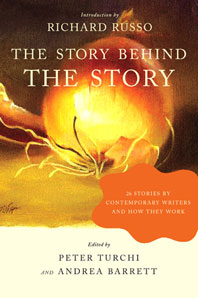 In a splendid display of show-and-tell, 26 writers tell a story and lift the curtain to reveal how they did it.

This big, beautiful anthology of short fiction is for readers, writers, and anyone curious about the mysterious processes of literary minds. All contributors have been recent faculty members of the prestigious Warren Wilson Low Residency Program, including such literary favorites as Margot Livesey, Charles Baxter, Robert Boswell, Jim Shepard, Antonya Nelson, David Shields, and the editors themselves.

Each writer was asked to submit an original story, accompanied by an essay describing the challenges of the story and how they were met. Since writers resist herding, the editors were happily surprised by the wide range of essays—"fiction writers, when given the space, think about their work very differently." We learn about the genesis of a story, how story evolves, what was eventually relinquished and why, and how a story—surprisingly—might "insist" on changing.

Arranged alphabetically by author, and beginning with Richard Russo's cogent introduction, this volume is a treasure throughout.