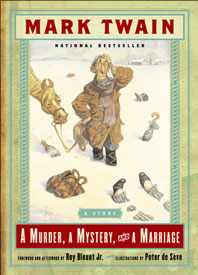 An unpublished Mark Twain story surfaces 125 years after it was first written—a must-read for any Twain enthusiast and a perfect introduction to The Adventures of Huckleberry Finn.

America's great love affair with Mark Twain continues with the paperback publication of this new work that first emerged in the fall of 2001. , A Murder, a Mystery, and a Marriage, Twain's delightful rendition of life (and a disturbing death) in the mythical hamlet of Deer Lick, Missouri, chronicles the fortunes of a humble farmer, John Gray, determined to marry off his daughter Mary to the scion of the town's wealthiest family. But the sudden appearance of a stranger found lying unconscious in the snow not only derails Gray's plans but also leads to a mysterious murder whose solution lies at the heart of this captivating story. Including a foreword and afterword by best-selling humorist Roy Blount Jr. and stunning, award-winning paintings by illustrator Peter de Seve, A Murder, a Mystery, and a Marriage will delight Twain lovers for generations to come. Winner of the 2001 Hamilton King Award from the Society of Illustrators.