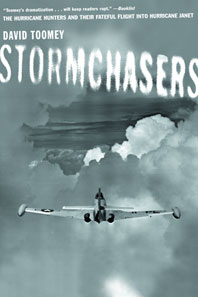 Fifty years after Isaac's Storm, a riveting story of the first Hurricane Hunters, and the one crew who paid the ultimate price.

"In a virtual age when tempests are monitored by global positioning and The Weather Channel, Stormchasers reminds us that our first understanding of hurricanes was directly built on the risks and sacrifices of living, breathing heroes," writes Hampton Sides (author of Ghost Soldiers).

In September 1955, Navy Lieutenant Commander Grover B. Windham and a crew of eight flew out of Guantánamo Bay into the eye of Hurricane Janet swirling in the Caribbean: a routine weather reconnaissance mission from which they never returned. In the wake of World War II, the Air Force and the Navy had discovered a new civilian arena where daring pilots could test their courage and skill. These Hurricane Hunters flew into raging storms to gauge their strength and predict their paths. Without computer, global positioning, or satellite support, they relied on rudimentary radar systems to locate the hurricane's eye and estimated the drift of their aircraft by looking at windblown waves below. Drawing from Navy documents and interviews with members of the squadron and relatives of the crew, Stormchasers reconstructs the ill-fated mission of Windham's crew from preflight checks to the chilling moment of their final transmission.