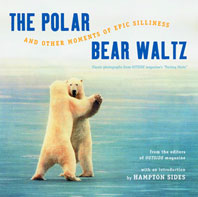 The most hilarious, whimsical moments captured on film, from twenty-five years of living Outside.

Short of near disaster or the sublime, what are our most memorable outdoor moments made of? The totally surprising, sometimes bizarre oddball moments that catch our psyches off guard and strike our funny bones to the core. Call it the wild side factor. The editors of Outside proudly present outstanding images gleaned from 300 issues of their back-page "Parting Shots" photo feature. It's their way of celebrating the pratfalls and singular coincidences of an outdoor life—the comic circumstances of relatively tame mammals (us) spending more and more time closer and closer to large, wild animals. These images are a rare chance to look into the wide world outside and laugh at both ourselves and that infinitely wondrous, entertaining three-ring circus we call the universe.

Also By: Outside Magazine