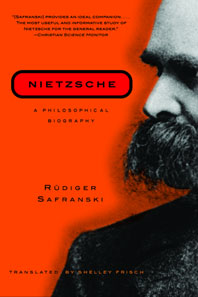 A seminal biography, essential reading for anyone studying the philosophy of history's most enigmatic and fascinating thinker.

No other modern philosopher has proved as influential as Friedrich Nietzsche (1844-1900) and none is as poorly understood. In the first new biography in decades, Rüdiger Safranski, one of the foremost living Nietzsche scholars, re-creates the anguished life of Nietzsche while simultaneously assessing the philosophical implications of his morality, religion, and art. Struggling to break away from the oppressive burdens of the past, Nietzsche invented a unique philosophy based on compulsive self-consciousness and constant self-revision. As groundbreaking as it will be long-lasting, this biography offers a brilliant, multifaceted portrait of a towering figure.