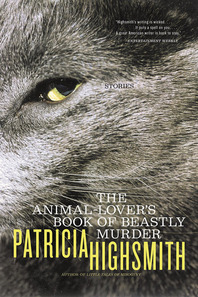 "Grisly and atmospheric…[these] stories feature small worlds of animal amorality in which the sweet taste of revenge leaves no aftertaste of guilt." —Publishers Weekly

Nowhere is Patricia Highsmith's affinity for animals more apparent than in The Animal-Lover's Book of Beastly Murder, for here she transfers the murderous thoughts and rages most associated with humans onto the animals themselves. You will meet, for example, in "In the Dead of Truffle Season," a truffle-hunting pig who tries to whet his own appetite for a while; or Jumbo in "Chorus Girl's Absolutely Final Performance," a lonely, old circus elephant who decides she's had enough of show business and cruel trainers for one lifetime. In this satirical reprise of Kafka, cats, dogs, and breeding rodents are no longer ordinary beings in the happy home, but actually have the power to destroy the world in which we live.

“A border zone of the macabre, the disturbing, the not quite accidental…Highsmith achieves the effect of the occult without any recourse to supernatural machinery.” — New York Times Book Review

“Mesmerizing…not to be recommended for the weak-minded and impressionable.” — Washington Post Book World