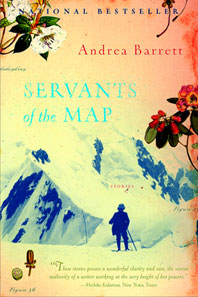 "Luminous....Each [story] is rich and independent and beautiful and should draw Barrett many new admirers."—Publishers Weekly, starred review

Ranging across two centuries, and from the western Himalaya to an Adirondack village, these wonderfully imagined stories and novellas travel the territories of yearning and awakening, of loss and unexpected discovery. A mapper of the highest mountain peaks realizes his true obsession. A young woman afire with scientific curiosity must come to terms with a romantic fantasy. Brothers and sisters, torn apart at an early age, are beset by dreams of reunion. Throughout, Barrett's most characteristic theme—the happenings in that borderland between science and desire—unfolds in the diverse lives of unforgettable human beings. Although each richly layered tale stands independently, readers of Ship Fever (National Book Award winner) and Barrett's extraordinary novel The Voyage of the Narwhal, will discover subtle links both among these new stories and to characters in the earlier works.

“These stories possess a wonderful clarity and ease, the serene authority of a writer working at the very height of her powers.” — New York Times

“Gemlike stories that sparkle with intelligence and fire.” — O, The Oprah Magazine