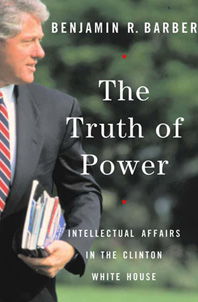 Ideas and the presidency flirt with each other, but can they really get along?

President Clinton had a romance with big ideas. He intently cultivated intellectuals, seducing them with his characteristic charm and with the promise of real influence on the political stage. Yet most often he disappointed the big thinkers whose advice he sought.

Benjamin Barber was first invited to Camp David in 1994, along with other prominent members of the academic community, to participate in a "seminar" with President Clinton on the future of Democratic ideas and ideals. Afterwards, he became a steady informal adviser to the White House. For a politically committed professor like Barber, the opportunity was exhilarating—here was an opportunity to put ideas into action, to link ideas to power. The result was enlightening, if unexpected. The most unpredictable factor was the president himself: a man of astonishing intellectual gifts, a consummate listener and synthesizer of ideas, who nonetheless failed to present a stirring progressive vision or even to craft a memorable speech.

With great perceptiveness, wit, and élan, Barber provides a startling meditation on truth and power—and the truth of power, which is the responsibility of the elected not to an idea but to the electorate. He identifies the fault lines that future progressive candidates must straddle if they are to win—and the gift they must have, if they are to be great, of calling forth the best in their fellow citizens. In the end, Barber give us a unique portrait of our compelling and maddening ex-president, and the hopes and disillusionments he represents.