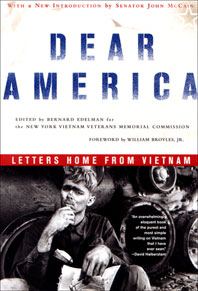 "An overwhelmingly eloquent book of the purest and most simple writing on Vietnam."—David Halberstam

Nearly forty years after the official end of the Vietnam War, Dear America allows us to witness the war firsthand through the eyes of the men and women who served in Vietnam. In this collection of more than 200 letters, they share their first impressions of the rigors of life in the bush, their longing for home and family, their emotions over the conduct of the war, and their ache at the loss of a friend in battle. Poignant in their rare honesty, the letters from Vietnam are "riveting,... extraordinary by [their] very ordinariness... for the most part, neither deep nor philosophical, only very, very human" (Los Angeles Times). Revealing the complex emotions and daily realities of fighting in the war, these close accounts offer a powerful, uniquely personal portrait of the many faces of Vietnam's veterans.

“Not a history book, not a war novel.... Dear America is a book of truth.” — Boston Globe

“Dear America is painful, but it must be difficult to be realistic and entertaining about war.... Reading it, I felt I was listening to the voices of the men and women who lived and fought in Vietnam.” — Baltimore Sun

“Dear America tells of an ache as ancient as time—adolescents off to war with high expectations, who soon change greatly. Ambiguities abound—from pain, disillusionment and sorrow for dead comrades to a hard-earned measure of individual strength and survival.” — Washington Post Book World

“Here is the sad and beautiful countermelody of truth, audible at last, now that we have trashed the drums and cymbals of yet another senseless war.” — Kurt Vonnegut

“No full understanding of the most disastrous foreign war in American history can be complete without reading these letters from the GIs to their loved ones back home.” — Peter Arnett, Pulitzer Prize-winning Vietnam correspondent