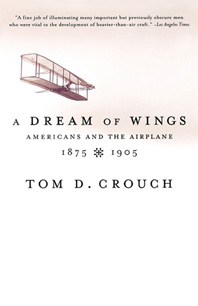 The story of the talented American engineers and adventurers who labored to conquer gravity in a flying machine.

When Orville and Wilbur Wright soared over Kill Devil Hills in North Carolina's outer banks and solved the problem of aerial navigation, they wrote the last chapter in a long story. For decades prior, a small community of engineers, scientists, and dreamers—men named Chanute and Langley and Herring—had tried to make the ascent in every conceivable craft, from kites and gliders to an assortment of powered flying models.

These imaginative people and their wonderful contraptions are brought to life in Tom Crouch's classic A Dream of Wings. In the quest for flight, aeronautical societies were formed and broke apart, successes were celebrated, hopes rose and fell, and lessons were learned and built upon. The dreamers who blazed the path to a flying machine are bravely realized in these delightful pages.

“A fine job of illuminating many important but previously obscure men who were vital to the development of heavier-than-air craft.” — Los Angeles Times

“The fullest, most authoritative record to date—and something more than technological history.” — Kirkus Reviews