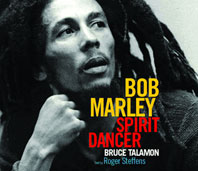 A photographic and textual meditation on the life of a legend, reissued in special CD-size format.

Twenty years after Bob Marley's untimely death he remains a powerful worldwide presence. His music is at the top of the reggae charts, while his memory is indelibly etched in the minds of millions of his followers.

In the last two years of his life Marley underwent a dramatic change, becoming a gentler and more philosophical version of himself. He also met photographer Bruce Talamon, to whom he granted unprecedented access, both on the stage and off. The result is this remarkable visual record, which, paired with Roger Steffens's sensitive text tracing Marley's life from his youth in Jamaica to worldwide acceptance, captures (in the words of the late Timothy White's introduction) "the private warmth, social equanimity, zealous determination...and personal magnetism" of Bob Marley.