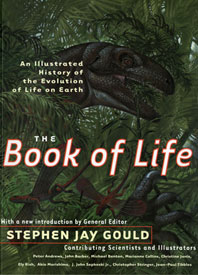 A new edition of the beautifully illustrated depiction of the dramatic story of survival and extinction.

The Book of Life uses an exemplary fusion of art and science to tell the story of life on earth. The text, under the editorship of Stephen Jay Gould, provides a thorough understanding of the latest research and is accompanied by paintings prepared especially for this book. Never before has our planet's evolution been so clearly, so ingeniously explained. History is marked by disaster. The Book of Lifeexplains how mammals, having survived at least one of these disasters—the impact of a massive comet—luckily inherited the earth. Next came the rise of modern humans, who would shape the world as no creature has. As this fascinating history unfolds, gorgeous illustrations allow us to observe climate changes, tectonic plate movement, the spread of plant life, and the death of the dinosaurs. We discover the chains of animal survival, the causes and consequences of adaptation, and finally the environmental impact of human life.