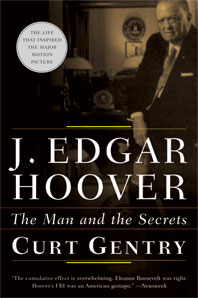 "The cumulative effect is overwhelming. Eleanor Roosevelt was right: Hoover’s FBI was an American gestapo." —Newsweek

Shocking, grim, frightening, Curt Gentry’s masterful portrait of America’s top policeman is a unique political biography. From more than 300 interviews and over 100,000 pages of previously classified documents, Gentry reveals exactly how a paranoid director created the fraudulent myth of an invincible, incorruptible FBI. For almost fifty years, Hoover held virtually unchecked public power, manipulating every president from Franklin D. Roosevelt to Richard Nixon. He kept extensive blackmail files and used illegal wiretaps and hidden microphones to destroy anyone who opposed him. The book reveals how Hoover helped create McCarthyism, blackmailed the Kennedy brothers, and influenced the Supreme Court; how he retarded the civil rights movement and forged connections with mobsters; as well as insight into the Watergate scandal and what part he played in the investigations of President John F. Kennedy and Martin Luther King Jr.

“The most extensive and controversial [book on Hoover] yet…A chilling look at the darker side of American politics.” — Library Journal