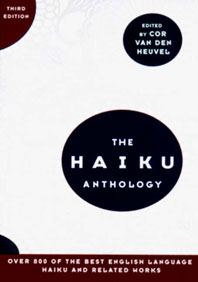 "Generous, irreplaceable. . . . It's an eye-opener and a who's-who of haiku today."—Providence Sunday Journal

Originally a Japanese form that flourished in the seventeenth and eighteenth centuries, haiku has recently experienced tremendous growth in popularity in the English language. The Haiku Anthology, first published in 1974, is a landmark work in modern haiku, honoring a genre of poetry that celebrates simplicity, emotion, and imagery—in which only a few words convey worlds of mystery and meaning. This third edition, now completely revised and updated, comprises 850 haiku and senryu (a related genre, usually humorous and concerned with human nature) written in English by 89 poets, including the top haiku writers of the American past and present. A new foreword details developments since the publication of the last edition. "Each of these perfect little poems will come as a revelation to the uninitiated reader and will bring joy to the haiku enthusiast. . . . This is an exceptional selection of English-language haiku at its finest."—Library Booknotes