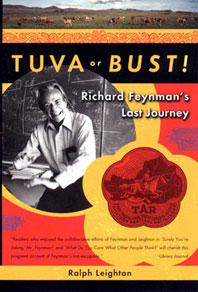 As a stamp-collecting boy always fascinated by remote places, Nobel Prize–winning physicist Richard Feynman was particularly taken by the diamond-shaped stamps from a place called Tannu Tuva deep within Outer Mongolia. He hoped, someday, to travel there.

In 1977, Feynman and his sidekick— fellow drummer and geography enthusiast Ralph Leighton—set out to make arrangements to visit Tuva, doing noble and hilarious battle with Soviet red tape, befriending quite a few Tuvans, and discovering the wonders of Tuvan throat-singing. Their Byzantine attempts to reach Tannu Tuva would span a decade, interrupted by Feynman's appointment to the committee investigating the Challenger disaster, and his tragic struggle with the cancer that finally killed him. Tuva or Bust! chronicles the deepening friendship of two zany, brilliant strategists whose love of the absurd will delight and instruct. It is Richard Feynman's last, best adventure.