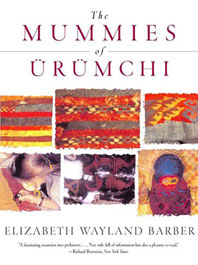 In the museums of Ürümchi, the windswept regional capital of the Uyghur Autonomous Region (also known as Chinese Turkestan), a collection of ancient mummies lies at the center of an enormous mystery.

Some of Ürümchi's mummies date back as far as 4,000 years—contemporary with the famous Egyptian mummies but even more beautifully preserved. Surprisingly, these prehistoric people are not Asian but Caucasoid—tall, large-nosed and blond with thick beards and round eyes. What were these blond Caucasians doing in the heart of Asia? What language did they speak? Might they be related to a "lost tribe" known from later inscriptions? Few clues are offered by their pottery or tools, but their clothes—woolens that rarely survive more than a few centuries—have been preserved as brightly hued as the day they were woven. Elizabeth Wayland Barber describes these remarkable mummies and their clothing, and deduces their path to this remote, forbidding place. The result is a book like no other—a fascinating unveiling of an ancient, exotic, nearly forgotten world. A finalist for the Kiriyama Pacific Rim Book Prize.