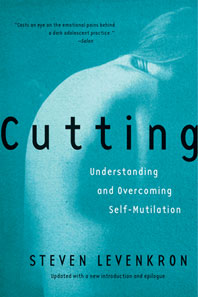 Nearly a decade ago, Cutting boldly addressed a traumatic psychological disorder now affecting as many as two million Americans and one in fifty adolescents. More than that, it revealed self-mutilation as a comprehensible, treatable disorder, no longer to be evaded by the public and neglected by professionals. Using copious examples from his practice, Steven Levenkron traces the factors that predispose a personality to self-mutilation: genetics, family experience, childhood trauma, and parental behavior. Written for sufferers, parents, friends, and therapists, Cutting explains why the disorder manifests in self-harming behaviors and describes how patients can be helped.

“Casts an eye on the emotional pains behind a dark adolescent practice.” — Salon

“Levenkron understands well the need for sharing basic information about this taboo subject as well as strategies for treatments. As a therapist who has worked with this problem for more than twenty years, he has much to offer.... Well written and engaging, [Cutting] educates the reader about a subject on which too little has been written.” — New England Journal of Medicine

“Clear and comprehensive information on the causes and effective treatments of this mysterious disorder.” — Publishers Weekly