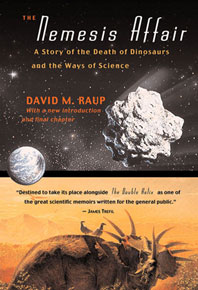 "David Raup is, to put it baldly and justly, the world's most brilliant paleontologist."-Stephen Jay Gould

Nemesis is the name given by scientists to a (theoretical) small companion star to our sun. Every 26 million years, Nemesis's orbit brings it close enough to the sun to bombard our solar system with billions of comets. While most of the comets will float harmlessly beyond the outer planets, some passing through the sun's Oort Cloud will be deflected by its gravitational force toward Earth. Such a "large-body impact," the Nemesis theory holds, was responsible for the mass extinction that led to the demise of the dinosaurs. The next impact, millions of years from now, might very well extinguish humanity. In this lively, fascinating, and often disturbing book, updated and revised with the latest scientific evidence on terrestrial impacts, David M. Raup re-explores the controversies of the Nemesis theory from the trenches of the scientific community, and investigates the issues-both scientific and philosophical-of mass extinction. "A fascinating insider's view of scientists at work-and at odds-on the issues of extinction, evolution, and the fate of dinosaurs."-John Noble Wilford