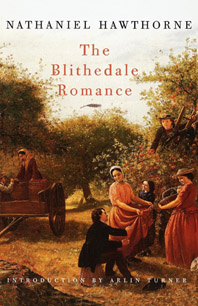 Henry James called The Blithedale Romance "the lightest, the brightest, the liveliest" of Hawthorne's novels and his character Zenobia “the nearest approach that Hawthorne . . . made to the complete creation of a person.”

Written in one of the most productive periods of his career, Hawthorne’s Blithedale Romance was published in 1852, a year after The House of the Seven Gables and two years after his masterpiece The Scarlet Letter. With The Blithedale Romance, Hawthorne writes fully in his own time, not haunting his characters with the American past. Drawn from his stay at Brook Farm, a communal experiment in living the pastoral life, the story is an engaging one that touches on many of the issues of his day, from brotherhood to women's rights and socialism. It remains a captivating work about politics, love, the supernatural, and idealism, written with Hawthorne’s sharp wit and deep intelligence.