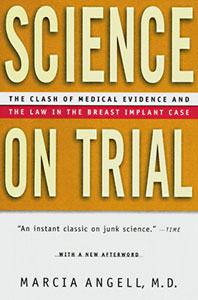 "An accessible, passionate indictment of the ignorance, opportunism and social indifference that enriched lawyers and a few plaintiffs, though the available scientific evidence was against them." —New York Times Book Review, Notable Books of 1996

In the early 1990s, sympathetic juries awarded huge damages to women claiming injury from silicone breast implants, leading to a $4.25 billion class-action settlement that still wasn’t large enough to cover all the claims. Shockingly, rigorous scientific studies of breast implants have now shown that there is no significant link between breast implants and disease. Why were the courts and the public so certain that breast implants were dangerous when medical researchers were not? The answer to this question reveals important differences in the way science, the law, and the public regard evidence—and not just in the breast implant controversy.

“[A] sober and rigorous examination of the controversy over silicone breast implants . . . an important statement, not just about silicone implants, but about other matters at the intersection of law, science, and opinion. [Dr. Angell’s] book is . . . a warning that rationality, like much else in the fragile porcelain of society, can be weakened by lack of vigilance.” — New York Times

“An indispensable guide to the breast implant madness—litigation that will forever stand as a monument to the inability of our civil justice system to sort out latter-day Ptolemies from Galileos.” — Wall Street Journal