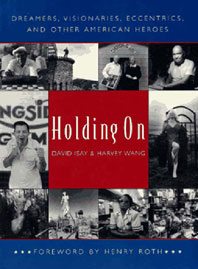 This book is a tribute to some of America's greatest characters, people holding on to unique ways of life at all costs. A castle builder, a forty-year veteran Woolworth's lunch-counter waitress, a moonshiner, and the president of The Brooklyn Elite Checker Club are among this varied group of ordinary people who prevail against all odds. They are Dewey Chafin and Barbara Elkins, snake handlers for the Church of the Lord Jesus in Jolo, West Virginia; Amos Powers, caretaker of America's only coon-dog graveyard in Colbert County, Alabama; Dixie Evans, curator of Exotic World, Museum of Burlesque in Helendale, California; and Mike Gashwarza of the Hopi tribe, fighting against electricity being brought to Old Oraibi, Arizona, the oldest town in North America.

David Isay's compelling, often humorous profiles are accompanied by Harvey Wang's wonderful portraits of fifty such people, die-hard individualists who speak for themselves, illuminating their remarkable lives and personalities. Henry Roth's foreword is a moving testament to the creativity, tenacity, and dignity these people possess.