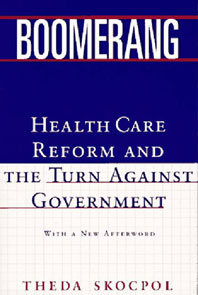 How did the debate on health reform turn into the most concerted attack on government in recent American history?

In this incisive account, a prize-winning social scientist offers deep insights into the changing terrain of U.S. politics and public policy. Because of far-reaching changes in the Reagan era, Theda Skocpol shows, the Clinton Health Security bill became a perfect foil for antigovernment mobilization. Thus its defeat provides a unique window into the new political landscape.

“A grim yet instructive diagnosis of what ails the American body politic.” — Robert Schmuhl, Philadelphia Inquirer