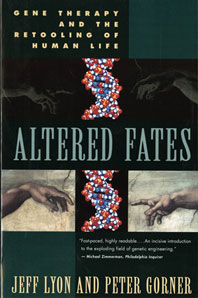 Seven years in the making, Altered Fates chronicles the saga of gene therapy, a medical revolution unparalleled in human history.

In the pages of this rich and detailed narrative, whose characters include the field's leading scientists as well as key patients and their families, the Pulitzer Prize-winning authors tell the story of the race to be the first to do gene therapy (a feat almost certain to garner a Nobel Prize and a place in medical history), uncovering the behind-the-scenes machinations and rivalries among the prima-donna researchers at some of the world's leading medical centers, including the National Institutes of Health. They also reveal the details of the initial human experiments in gene transfer and the agonizing decisions faced by the families of the first children to be submitted to the therapy.

As Daniel Kevles observed in the New York Times Book Review, "Mr. Lyon and Mr. Gorner are highly knowledgeable about the state of human and medical genetics, and their treatment of both the science and its practitioners is vivid, accessible, and . . . gripping."

“Starred Review. Well written, exhaustively researched, and filled with the human stories of the scientists, the doctors, and the patients whose only hope is this new field of medicine.” — Kirkus Reviews

“Fast-paced, highly readable. . . . As engaging as any thriller, [it] brings to life the pathos, the excitement, and the drudgery inherent in this sort of research.” — Philadelphia Inquirer