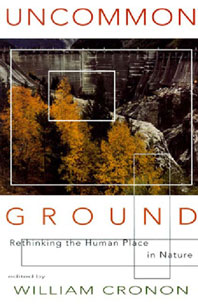 A controversial, timely reassessment of the environmentalist agenda by outstanding historians, scientists, and critics.

In a lead essay that powerfully states the broad argument of the book, William Cronon writes that the environmentalist goal of wilderness preservation is conceptually and politically wrongheaded. Among the ironies and entanglements resulting from this goal are the sale of nature in our malls through the Nature Company, and the disputes between working people and environmentalists over spotted owls and other objects of species preservation.

The problem is that we haven't learned to live responsibly in nature. The environmentalist aim of legislating humans out of the wilderness is no solution. People, Cronon argues, are inextricably tied to nature, whether they live in cities or countryside. Rather than attempt to exclude humans, environmental advocates should help us learn to live in some sustainable relationship with nature. It is our home.