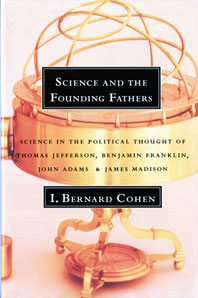 Thomas Jefferson was the only president who could read and understand Newton's Principia. Benjamin Franklin is credited with establishing the science of electricity. John Adams had the finest education in science that the new country could provide, including "Pnewmaticks, Hydrostaticks, Mechanicks, Staticks, Opticks." James Madison, chief architect of the Constitution, peppered his Federalist Papers with references to physics, chemistry, and the life sciences.

For these men science was an integral part of life—including political life. This is the story of their scientific education and of how they employed that knowledge in shaping the political issues of the day, incorporating scientific reasoning into the Constitution.

“A fascinating study…the founding fathers appear in an interesting new light, thanks to Cohen's fresh, not to say iconoclastic, vision.” — Kirkus Reviews