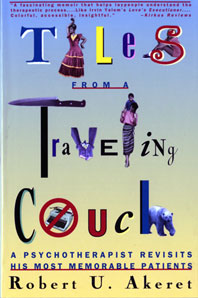 After thirty-five years in practice, prominent New York psychotherapist and author Robert Akeret found himself in the thrall of a single question: Did therapy make a real difference in his patients lives?

So, on a sunny morning in April, Dr. Akeret got in his van and set off to visit his most memorable former patients--a journey "in search of story endings." And what remarkable stories they are...

Naomi, an abused young Jewish girl from the Bronx who transforms herself into a Spanish flamenco dancer named Isabella--what is she like now, in her mid-fifties?

What about Charles, who fell madly in love with a circus polar bear? Had he been able to resist his fatal psychosexual attraction?

What of Sasha, the dashing, prize-winning French novelist with writers block and a penchant for exploiting women? In the end, did his art prevail or his life?

And what became of Mary--did she ever "murder" again?

Like a brilliant psychological detective novel, this book tells its stories in fascinating detail while raising fundamental questions about psychotherapy.


Also By: Robert U. Akeret