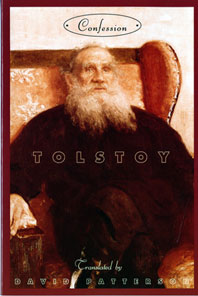 In 1879 the fifty-one-year-old author of War and Peace and Anna Karenina came to believe that he had accomplished nothing and that his life was meaningless.

Marking a shift in his career from the aesthetic to the religious, Tolstoy's Confession relates this spiritual crisis, posing the question: Is there any meaning in my life that will not be destroyed by my death? It is a timeless account of an individual's struggle for faith and meaning.