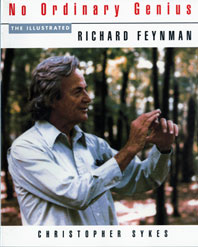 An intimate, moving, and funny account of the remarkable life and times of Richard Feynman—the most extraordinary scientist of his age.

With a unique combination of dazzling intellect and touching simplicity, Feynman had a passion for physics that was merely the Nobel Prize-winning part of an immense love of life and everything it could offer. He was hugely irreverent and always completely honest—with himself, with his colleagues, and with nature.

No Ordinary Genius traces Feynman's remarkable adventures inside and outside science, in words and more than one-hundred photographs, many of them supplied by his family and close friends. The words are often his own and those of family, friends, and colleagues such as his sister, Joan Feynman; his children, Carl and Michelle; Freeman Dyson; Hans Bethe; Daniel Hillis; Marvin Minsky; and John Archibald Wheeler. The book gives vivid insight into the mind of a great creative scientist at work and at play, and it challenges the popular myth of the scientist as a cold reductionist dedicated to stripping romance and mystery from the natural world. Feynman's wonderfully infectious enthusiasm shines through in his photographs and in his tales.

“The many photographs, along with...anecdotes and monologues taken from interviews...give the reader...insight into the depth of Feynman's originality and gifts as a physicist.” — Washington Times