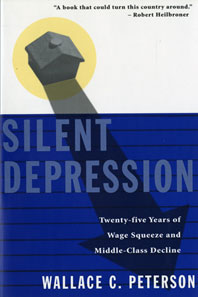 The year 1973 marked a turning point, as Peterson makes clear in this carefully documented book. When several key economic indicators changed course, the "silent depression set in, resulting in problems for the shrinking middle class, the poor, and the American family." Peterson calls for strong medicine and closes with proposals for health care, education, and the tax system that will help speed the economy's recovery.

“Wallace Peterson has written a book that could turn this country around.” — Robert Heilbroner