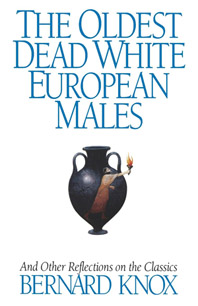 “No one carries his learning more gracefully than Knox. That is because he does not, like so many scholars, seal it off from the rest of life. Ancient and current wisdom communicate through him.” —Garry Wills

Should the ancient Greeks—"the oldest dead white European males"—be kept alive in our collective memory? Why study them at all if, by passing their destructive ideas to the Romans and eventually to the rest of Europe, they may ultimately be responsible for much of what’s wrong with American society? In this “supremely lucid and elegant” book (The New Yorker), Bernard Knox poses and answers such fundamental questions, helping us to remember the astonishing originality of the ancient Greeks and all that we have learned—and continue to learn—from them.