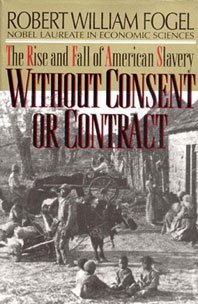 "[Fogel's] exceedingly careful testing of all possible sources and his pioneering methodological approach have allowed [him] both to increase our knowledge of an institutions operation and disintegration and to renew our methods of research." —from the citation to Robert William Fogel for the Nobel Memorial Prize in Economic Sciences

Over the past quarter-century, Robert William Fogel has blazed new trails in scholarship on the lives of the slaves in the American South. Now he presents the dramatic rise and fall of the "peculiar institution," as the abolitionist movement rose into a powerful political force that pulled down a seemingly impregnable system.

“Few historians have more skillfully integrated economic with social, intellectual, and political history. . . . Pleasurable as well as instructive reading for anyone interested in the most fateful of our national crimes and the most fearful of our national crises. . . . [A] splendid book.” — Eugene D. Genovese, Los Angeles Times Book Review