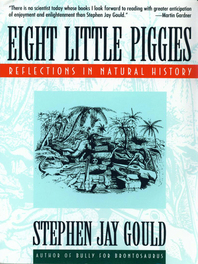 "There is no scientist today whose books I look forward to reading with greater anticipation of enjoyment and enlightenment than Stephen Jay Gould."—Martin Gardner

Among scientists who write, no one illuminates as well as Stephen Jay Gould doesthe wonderful workings of the natural world. Now in a new volume of collected essays—his sixth since Ever Since Darwin—Gould speaks of the importance of unbroken connections within our own lives and to our ancestralgenerations. Along with way, he opens to us the mysteries of fish tails, frog calls, and other matters, and shows once and for all why we must take notice when a seemingly insignificant creature is threatened, like the land snail Partula from Moorea, whose extinction he movingly relates.

“A lovely mixture of bizarre facts, nice arguments, clever insights into the workings of evolution and a quality of writing that can make your skin prickle.. . . Gould has given us a feast.” — Nature

“Like the master, Darwin, [Gould] has a gift for metaphor—for finding striking analogies that highlight the organizing principles behind Nature.” — Newsday