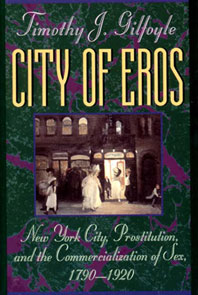 Winner of the Allan Nevins Prize of the Society of American Historians and the New York State Historical Association Manuscript Prize.

“Gilfoyle has tied together into one package the interrelationship between the role and status of women, American ideas about sex, the effects of urbanization and immigration, real estate speculation, vigilantism, and politics. . . . In short, he has effectively brought issues of sexuality into social history. . . . Deserving of the highest praise.” — Vern L. Bullough, Historian

“Remarkable. . . . [A] clear and fascinating narrative . . . [that] opens up plenty of new lines of inquiry. . . . A major contribution to the history of gender, popular culture, and the life of New York City.” — Elliott J. Gorn, Journal of American History

“A fascinating study. . . . Gilfoyle does not simply catalogue the omnipresence of the postitutes. He situates their trade in the economic life of the city. . . . City of Eros is social history at its best, beautifully written, with a mosaic of rich detail that informs but does not overwhelm the narrative line.” — David Nasaw, New York Times Book Review

“A wonderful book. The research is overwhelming in breadth, precision, and imagination. City of Eros beautifully portrays an aspect of social and urban, as well as economic history, which we can no longer ignore.” — Mary P. Ryan, University of California, Berkeley