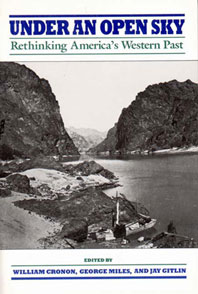 “If you prefer history served in a dozen fresh ways, get this book.” —Chicago Tribune

The history of the American West is being transformed by exciting new ideas, new questions, new scholarship. For many years this field was dominated by popular images of the lone cowboy and the savage Indian, and by Frederick Jackson Turner's concept of the frontier as a steadily advancing source of democracy and social renewal. But now historians and even the merchants of popular culture are reshaping our views of the frontier and the West by taking up a rich array of new subjects, including the stories of diverse peoples as well as the history of the land itself. A new generation of scholars is reformulating the broader questions also: What was the significance of the frontier in American history? What are the bases of western identity? What themes connect the twentieth-century West to its more distant past? The transformation of western history continues to be an open-ended, turbulent process. The original essays in this volume are reports from the frontier of change. In their diverging assumptions and conclusions, they reflect the vitality of this field. They succeed when they make the case for new questions and suggest possible answers. They advocate no single agenda. But taken together they well represent the passion and high craft with which scholars are creating a new western history.