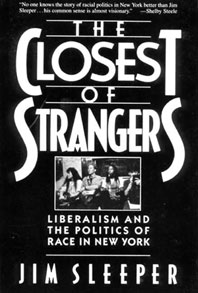 "In this study of race relations in N.Y.C., Sleeper, an editorial writer for New York Newsday, harshly criticizes both black leaders and their liberal supporters for pointing a finger at America's racist society rather than setting concrete goals to overcome inequality." —Kirkus Reviews

A report of the current state of race relations in New York City, which examines the differing views of militants, liberals and forgotten minorities, and presents suggestions for racial common sense that attempt to demolish long-standing stereotypes.