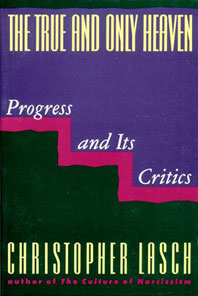 "A major and challenging work. . . . Provocative, and certain to be controversial. . . . Will add important new dimension to the continuing debate on the decline of liberalism." —William Julius Wilson, New York Times Book Review

Can we continue to believe in progress? In this sobering analysis of the Western human condition, Christopher Lasch seeks the answer in a history of the struggle between two ideas: one is the idea of progress - an idea driven by the conviction that human desire is insatiable and requires ever larger production forces. Opposing this materialist view is the idea that condemns a boundless appetite for more and better goods and distrusts "improvements" that only feed desire. Tracing the opposition to the idea of progress from Rousseau through Montesquieu to Carlyle, Max Weber and G.D.H. Cole, Lasch finds much that is desirable in a turn toward moral conservatism, toward a lower-middle-class culture that features egalitarianism, workmanship and loyalty, and recognizes the danger of resentment of the material goods of others.

“A profound and intellectually honest work of breathtaking historical scope that could easily set the terms of political debate in a post-cold-war world in which the ideologies of right and left seem totally exhausted. . . . A cleareyed study of our usable past.” — Kirkus Reviews

“Christopher Lasch has written a great book about the most important things. As a major contribution to public discourse, The True and Only Heaven will be at the center of discussion for years to come.” — Robert Bellah, coauthor of Habits of the Heart