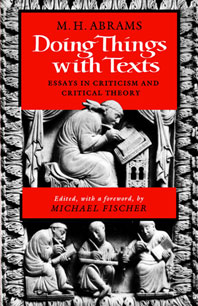 “One of the most respected literary scholars alive, . . . Abrams stands for understanding and conciliation, calling for a kind of humanism that can embrace the good in all literary theories.” —Washington Post

This volume brings together for the first time influential essays and reviews by one of our most important literary critics. Spanning three decades, the essays concern themselves with the most central development themes in recent criticism, from the New Criticism to the much-debated “Newreading” and “New Historicism.” Two other essays discuss the emergence of the remarkably influential modern view that a work in the fine arts is an autonomous object, and another offers an extraordinary overview of the history of criticism from Plato and Aristotle to Jacques Derrida and Paul de Man.