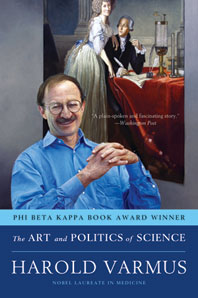 A PhD candidate in English literature at Harvard University, Harold Varmus discovered he was drawn instead to medicine and eventually found himself at the forefront of cancer research at the University of California, San Francisco. In this “timely memoir of a remarkable career” (American Scientist), Varmus considers a life’s work that thus far includes not only the groundbreaking research that won him a Nobel Prize but also six years as the director of the National Institutes of Health; his current position as the president of the Memorial Sloan-Kettering Cancer Center; and his important, continuing work as scientific adviser to President Obama. From this truly unique perspective, Varmus shares his experiences from the trenches of politicized battlegrounds ranging from budget fights to stem cell research, global health to science publishing.

“A perceptive book about science and its civic value, arriving as the White House renews its acquaintance with empiricism.” — The New York Times