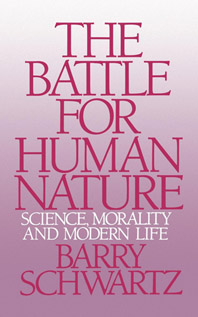 “Provocative and richly textured. . . .Schwartz’s analyses of the inadequacies of contemporary scientific views of human nature are compelling, but the consequences are even more worthy of note.” —Los Angeles Times

Out of the investigations and speculations of contemporary science, a challenging view of human behavior and society has emerged and gained strength. It is a view that equates “human nature” utterly and unalterably with the pursuit of self-interest. Influenced by this view, people increasingly appeal to natural imperatives, instead of moral ones, to explain and justify their actions and those of others.