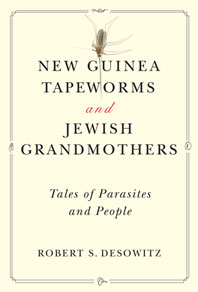 The medical tapestry of the world is full of organisms too small to see, carried by flying and creeping creatures too numerous to eradicate.


A while ago, DDT and the antimalarial drug chloroquine seemed sure to make us all safe from such invisible assault.

It was not to be. The mosquito has become resistant to DDT; malaria is on the rise; although tapeworms rarely turn up any longer in the most lovingly prepared New York City gefilte fish, a worm may inhabit your sashimi; some strains of gonorrhea actually thrive on penicillin; there is even a parasite for the higher tax brackets—the "nymph of Nantucket"; and there are new ailments—legionnaire's disease, Lassa fever, and new strains of influenza.

In the long run, one might bet on the insects and the germs. Meanwhile Dr. Robert Desowitz has written a delightful and instructive book.

“Dr. Desowitz tells many wise and important things about the health problems of the Third World . . . and of our own world. Fortunately, he presents his views in the form of highly entertaining stories that reveal how the life complexities of the microbial agents of disease are more than matched by the oddities of human behavior.” — Rene Dubos